Since the mid 1970s, steel drum music (pan) has been an integral part of the musical tradition of the Blue Hill peninsula. Originating in the early 1940s in Trinidad by descendents of slaves, pan is now played and performed by musicians world wide. This music offers musicians and audiences alike the opportunity to participate in the growth of a musical style that evolved from a crude folk drum that rose out of repression into the finely tuned and world respected orchestral instrument of today. Because learning to play steel pans is relatively easy, it has attracted players of all ages and levels of musical ability.

While sailing in the Caribbean in 1973, Brooksville, Maine’s Carl Chase heard a small local steelband and was captivated by the sound. The subsequent gift of folk singer Pete Seeger's book, Steel Drums: How to Make Them and Play Them was all he needed to get started. Chase's fascination with the instrument led him to Trinidad where he refined his skills in the art of pan making and tuning. Once he had enough drums to form a band, Chase taught some friends how to play. In the summer of 1975 on the wooden steps of the Brooksville post office, the Atlantic Clarion Steel Band (named after a band member's old kitchen stove) first performed.

In 1990, Carl put an ad in the local paper inviting people to come to an adult education class at George Stevens Academy in Blue Hill to learn to play the steel drum. A few semesters and several outdoor gigs later, Flash in the Pans Community Steelband was born. Under the musical direction of Carl and his son Nigel Chase, FLASH! has grown to become one of the largest community-based steelbands in the country.

In 2001, Peninsula Pan, Inc. was created to manage the business affairs of Flash in the Pans Community Steelband. Peninsula Pan's 501(c)3 non-profit status allows it to accept donations and grants to offset the internal costs of Flash in the Pans, award scholarships, when needed, to local youth and adults taking steelband classes, and provide funding for other programs that fulfill its mission.

Several high schools in Maine, including the high school serving most of the Blue Hill peninsula, now teach steelband instrumental music as part of the regular curriculum, which exemplifies an open approach to music education.

You can learn more about the origins of steel drums in Trinidad and Tobago and learn how Pete Seeger helped bring steel drum music to the United States with this short 1956 video Music From Oil Drums (below).

(Read all about it here)

In the Shadows After Sunset

by Dartha C. Reid, Lamoine, ME

In the shadows after sunset, street dancing jumps into gear.

Shy teens gyrate by bold couples bobbing, swaying to the throb
of the Caribbean swelling from Flash in the Pans.

Begin again at first beat stitching pulses of joy
into the descending dark.

Infectious rhythms cloak dancers,
swayers in lawn chairs, rockers gathered on the grass,
all who pass fall under the spell
sewn into the air by steel pans in the shadows after sunset. 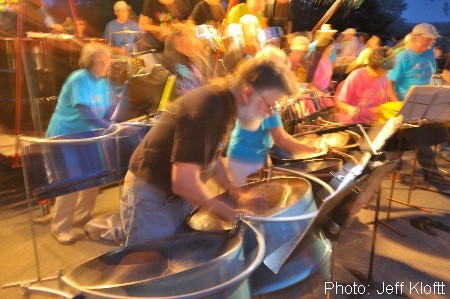